The generals plan to deploy their artillery troops on a grid map of N × M. 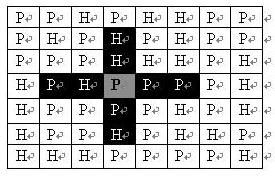 None of the other white grids on the map can be attacked.

It can be seen from the picture that the attack range of the artillery is not affected by the terrain.

Next N Rows, each row contains consecutive M characters ( P or H) without spaces. Represents the data of each row in the map in order.

Output format
Only one line, contains an integer K, Which indicates the maximum number of artillery units that can be placed.